KUALA LUMPUR – Malaysian police have rescued a Japanese man who was held for ransom after being lured to Malaysia to marry a woman he met over the Internet, a police official said Monday. 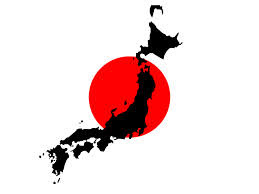 He said three Nigerian men and two Filipino women, all in their 30s, were arrested. One of the Nigerians was shot in the leg after allegedly resisting.

Ku said the Japanese engineer fell in love with a Filipino woman he was speaking to on Skype. He arrived last Tuesday with the intention of marrying her.
After picking him up at the airport, however, the woman handed him to three Nigerians at the condo. They tied him up and demanded $50,000 from his family in Japan. Ku said the family made an initial payment of $2,000.


Ku said the Japanese Embassy contacted Malaysian police after his family alerted police in Japan.
Posted by Syanida at 22:32 No comments:

WHAT ARE THE MARRIAGE FRAUD STATISTICS -USA 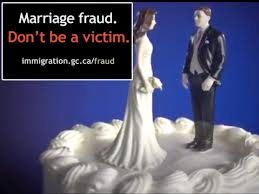 Fraud statistics show that between 1998-2007 more than 2 million people have reported marriage as a means to gain residency within the United States. Although some feel that fraud law is not enforced enough the penalties for committing such fraud are quite severe including jail time, up to $250,000.00 in fines, and deportation.

In 2007 twenty-five percent of green cards issued within the United States were to spouses married to American citizens which is also in violation of fraud law.

Between 1978-1984 government fraud statistics showed that the number of immigrants who married spouses that were Untied States Citizens increased about forty-three percent and that The Immigration and Naturalization stated that about thirty percent of these were frauds.

An estimation of 300,000 visas are issued a year and thirty percent are considered to be fraudulent according to fraud law.

However, in more recent years, The Immigration and Naturalization states that it is estimated that the number of United States citizens married lawfully to foreigners are about eight percent.

Statistics show that communities with a higher male mortality rate have a higher risk of polygamy which is violation to fraud law within the United States. 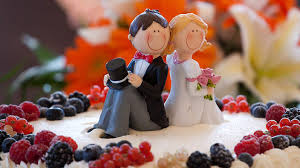 Due to the rising statistics of marriage fraud for immigration purposes and number of cases of abused women,the government created an act. The act was known as the "International Marriage Broker Regulations Act". This act requires that federal statute states that background checks must be conducted on marriage visa sponsors in order to limit the number of fraudulent marriages.  This will ensure penalties are given out against criminals who commit this federal offense.


Satwant Kaur was full of hope and happiness on the day she got married.
She had landed a husband who lived and worked overseas in Italy before returning to India to find a bride. She was looking forward to leaving her home in Punjab, northern India, for an exciting new life in Europe.

Her dream did not last long.

Less than a week after the wedding, it became obvious that her husband, Sarwan Singh, had no intention of taking her with him back to Italy. She was the victim of a scam. 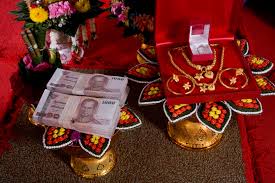 Indian men working abroad are much sought-after as husbands because of their relatively high incomes. Their families often demand huge dowries — a practice banned in India but still widespread in some areas.
Kaur says her family paid Singh and his relatives cripplingly large sums of money — the equivalent of $15,000 — during the wedding festivities alone.
Almost immediately afterward, Kaur's new in-laws came up with more demands. They wanted a television, a house and — after Singh went back to Europe — another $15,000. They threatened her with death if her family failed to pay up.

Kaur, now 30, has fled back to her family with her 3-year-old daughter — the product of Singh's brief visit. Mother and daughter must now live with the stigma of being abandoned.
She is not the only one. Social activists say as many as 15,000 women in the northern state of Punjab alone are victims of a growing racket in which Indian men based overseas arrange marriages back home for the purpose of extorting wealth from their brides' families. The problem is particularly acute in Punjab, as the state has a large number of people working overseas.
The problem has become so severe that a new group, For the Dignity of Our Daughters, was established in India to tackle it. It is led by a former federal minister, Balwant Singh Ramoowalia.
"Six-thousand children have been fathered by these NRI (non-resident Indian) Punjabis. Many Punjabi girls' parents have to shell out money to the tune of ($30,000 to $41,000)," Ramoowalia says.
Some brides are left waiting at airports, some left with their in-laws, all cheated of money, valuables and, most of all, dignity.
"The reason NRI grooms come to Punjab is not to chose a life companion, but ... because of money and lust," Ramoowalia says. 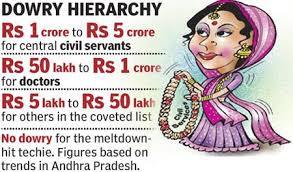 Tracking Down Offenders
Ramoowalia says the men are often confident that they'll escape without prosecution. But that is no longer the case. Ramoowalia's efforts have put a couple of men behind bars; he says his political party is vigilant in its efforts to track down offenders.

Ramoowalia's campaign is also mobilizing a new type of Punjabi bride, who — far from being docile and submissive — is determined to fight for justice.
Kaur is one of them. She wants her husband extradited from Italy, so that she can prosecute him for fraud.

We had interviewed the brother in law of one of the wives of Robert Andrew Scoot. This interview has been done on 8 June, Monday in Selangor.

Q1: What is your relationship with Robert Andrew Scoot?

A1: He is my sister in law ex husband. His Islam name is Abdul Haq.I call him Haq. But they already divorced last 2 years. He is from United Kingdom.

Q2: What is your opinion about Robert Andrew Scoot?

A2: He always wearing jubbah, has a beard, hold AL-Quran and prayer beeds in hand. He always talk about Islam.

Q2: What is your feeling when you read news about Robert Andrew Scoot in Berita Harian last year?

A3: I was shocked. But I had suspect these because I have read in newspaper about tabligh international. These tabligh trapped professional women to marry with them.

Q4: Tell me more about Robert Andrew Scoot job. For example his job.

A4: According to my sister in law, his job is a part time English teacher and music teacher. But I think he didn’t work, this story just to cover  her husband. Haq also tell us that he is a student at Open University and write a thesis PHD.

Q5: What is the impact of this wedding to your sister in law?

A5: After married with Haq, my sister in law always has no money and the life is more difficult to her. She also borrowed money from her mother. She has to support the family, Haq aslo not around and back to UK.. after she has no more money, Haq leave her.

Thank you for your cooperation. 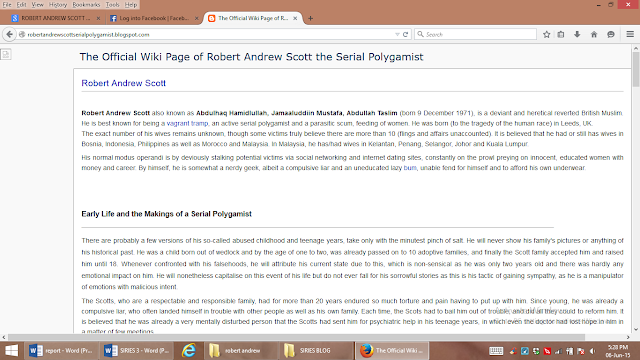 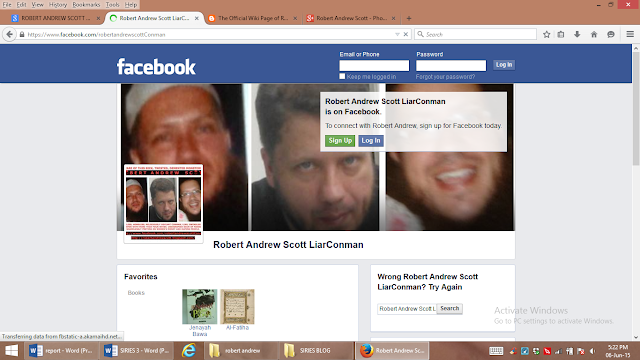 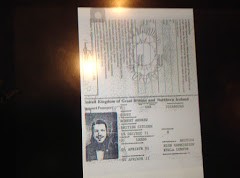 There are lack of internal control in procedure of marrying in Malaysia. If the bride/groom is  not Malaysian, they need to get permission from State Islamic Department (Jabatan Agama Islam  Negeri),

They need to give confirmation letter of their passport from Immigration Department (Malaysia) to State Islamic Department (Jabatan Agama Islam Negeri). Therefore,  there is no procedure to prove of their status whether single, divorced, or have married.
The demographic factor makes the State Islamic Department has no synchronize in data/ information about the person who married in other states and outside Malaysia. Scott can easily married and has wives in different states : Kelantan, Penang, Selangor, Johor  and Kuala Lumpur. 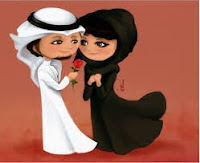 
Scott claimed that he had a million dollar properties in the UK. However, he is penniless and jobless.

Scott wives have to support him and the family. He uses wives  for food, money, shelter and sex.

Scoot has use the character as a good muslim and always be seen wearing  jubbah, hold AL-Quran and prayer beeds in hand.Scott also will pressure marry the victim after getting to know through the internet the victim for few weeks. 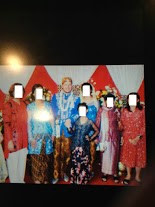 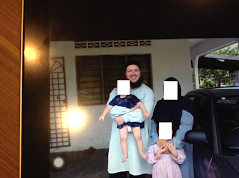